National Native HIV/AIDS Awareness Day on March 20th is an opportunity to raise awareness of the impact of HIV on Native people (American Indians, Alaska Natives and Native Hawaiians) across the United States and territorial areas. Today and every day, we can help reduce stigma and work to expand HIV education, testing, prevention, and treatment in Native communities. 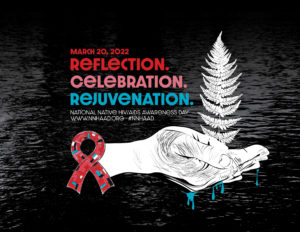 Resources from PAETC and Partner Organizations

Get the latest data on HIV and Native People

Among Native communities, HIV impacts certain groups more than others– for example, Gay and Bisexual Men represented 77% of new HIV diagnoses among AI/AN men in 2019. In the same year, injection drug use accounted for 40% of new HIV diagnoses among AI/AN women. According to the Centers for Disease Control and Prevention, factors such as high rates of sexually transmitted diseases among AI/AN populations, alcohol and drug use, and cultural stigma result in disproportionate HIV rates among Native communities.

It is also important to recognize how social determinants of health can negatively impact HIV-related health outcomes for Native communities due to a lack of access to affordable health care and financial insecurity. For example:

Check out the corresponding infographics from AIDSVu.org: